Like just about anything I suppose, you can even take skiing for granted. I am really getting into the spring mode...riding the bike....enjoying the signs of life in my yard and around town. But with only two days left before the lifts close for the season both in Big Sky and at Bridger I am determined to make the most of it. 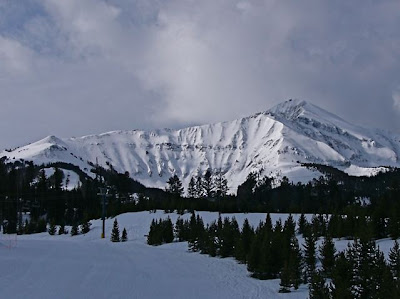 Moonlight Basin is the new kid on Lone Peak's northern aspect. Next door to the larger (ugh) Big Sky ski area, Moonlight Basin is just as un-crowded and has the same sort of general hugeness that its neighbor to the south serves up in spades. 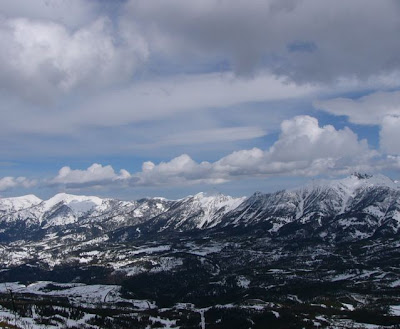 Most of my friends have either moved on from skiing in general for the season, or are just more willing to soak up the Montana spring sunshine unencumbered by huge plastic boots and gore-tex pants. 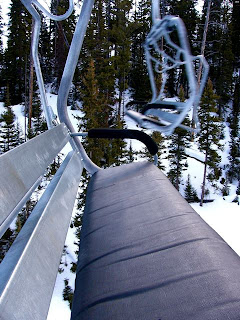 Not me. One more weekend. One more run. One more lap. The sun is fabulous. The lift lines - there aren't any - are something sadly I've come to expect at Bridger on powder days. The place is empty. I lose count of how many times I ride the six-person-per-chair "six shooter" lift by myself.

The snow varies from rock-hard re-constituted firmness at the lodge to really nice chalky old "powder" up high off of the Headwaters lift high in the bowls.

Later in the day, the groomers soften up to near perfect corn snow and I proceed to shred the ridiculously huge and uncrowded slopes like I'm gunning for some sort of world cup title.

I am delighted at lunch to find that the lodge is serving up burgers straight from the grill on the Moonlight Lodge deck for $6 (with potato salad, no less). When I inquire about beer, the convivial ski-bum at the grill simply opens up a cooler next to the grill and says "Kokanee cans for three bucks." Dude, that's like nine bucks for everything. I give him a $10 bill and shove the buck in the tip jar. 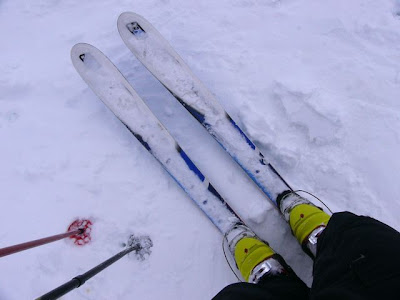 A few more laps as the sun comes and goes and once the light turns painfully flat I check out at the spring skiing approved time of only 2:30. 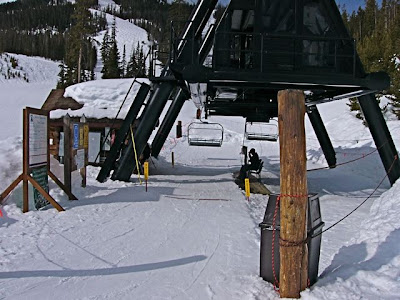 Usually a die-hard Bridger fan, I am somewhat smitten with my whole laid-back Moonlight Basin experience today.
Posted by Tom at 13.4.09