Just like my day before at Moonlight basin, I soak up every moment at Bridger the way my face noticeably soaks up the sun's UV rays. 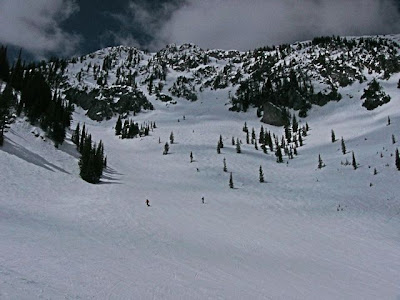 The ennui of mid-season skiing has a way of fading on the last days of the year. Every run takes on a sweetness fueled by the impending separation between skier and skis. As the winter comes to a close and with four and a half months of frequent skiing under my belt, my turns feel dialed-in and the slopes have become my playground.

Fortunately for me, I am sharing my playground with what seems like ten other people on the entire hill. 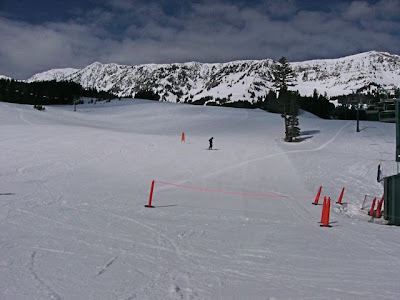 Technically speaking, the Bridger and Moonlight ski days followed a similar pattern: arrive late, have some scary and fast runs on the ice, take a break, and wait for the sun to turn the ice into creamy spring corn snow.

Around 12:30 the magic happens: perfect corn snow on a firm base. Snow like this just begs for a set edge. On my telemark equipment, each turn is a slow-motion flex of the knees and ankles all joined by a tipping of the skis to put them on edge. Done correctly, you leave two rather substantial and perfectly formed ruts in your wake. 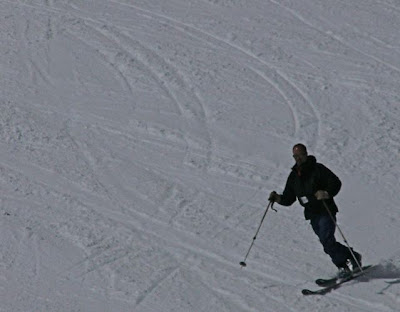 After a few hours, my friend Rick (seen above freeing the heel) and I heed a calling from our bellies for fuel. Fuel, and satisfaction on this day, arrives in the form of nachos and beer. I am quite certain that we have made the right culinary choice with this classic combo of man-food when the couple at the table next to us openly admits their "nacho envy."

"Those that forget history are doomed to repeat it." I'm not sure who said that in the first place...but I think they may be right. For evidence of this, I submit the Bridger Bowl Daily Video below, shot exactly one year ago with myself (in green, on tele gear), Rick (seen after myself in black, on tele gear), and a handful of others closing out the ski season:

"Doomed" to repeat history? Not so sure about that...more like "lucky enough."