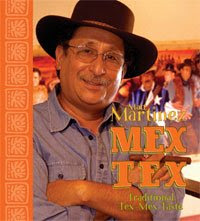 If the music died with Buddy Holly, then Tex Mex likely suffered the same fate last Friday with the passing of chef and cookbook author Matt Martinez Jr. .

Matt Martinez, Jr. was the son of famed Austin restaurateur Matt Martinez. Matt Sr.'s El Rancho opened its doors in 1952 and this is where Matt Jr. began a lifetime in the kitchen. Having prepared Tex-Mex cuisine for big shots like LBJ and the lucky masses in both Austin and Dallas, Matt leaves behind a great many full and satisfied bellies with his passing.

Just last month I had the good fortune to take in some of Matt's tasty Tex-Mex chow while visiting Dallas, which I wrote about in a recent post. As I mentioned in that post, Matt's Rancho Martinez served up true Tex-Mex goodness: delicate chile rellenos garnished with Texas pecans and raisins, a riff on chile con queso known as Bob Armstrong dip (a sinful bowl of queso concealing a core of ground beef, guacamole, sour cream) tender chicken fried steaks served three ways: traditional, with cream gravy and toast (that's Texas Toast anywhere else); cowboy, with chile con carne; or my favorite - tampequena style, with a tomatillo/chile verde sauce and rice and beans.

Speaking of rice and beans - refried beans, that is..."Oh Lard, How we love thee" exclaims Martinez in his book, Matt Martinez's Culinary Frontier: A Real Texas Cookbook. He goes on to discuss the process of rendering your own pork fat and further suggests, "Cook refried beans in this lard, and you may get your first glimpse of heaven."

As for that statement, Matt got it right. As for Matt's passing, I hope you've had that first glimpse, amigo.
Posted by Tom at 15.3.09