Our office building is on Main Street, directly across from the destruction zone and several of our offices have a lovely (horrible on this day) and direct view of Main Street and the Bridger mountains in the distance.

Having arrived at the office a bit early to install some software updates on our office computers, I was lagging behind my self-imposed schedule to get the machines ready for the other early risers at the office. Going office by office, in order of who usually shows up first, I was about a third of the way through the updating of the eleven machines in our office when I was interrupted by a co-worker.

I had been in one of the front offices when simultaneously the install I was working on hung and one of the two co-workers in the building called me to the kitchen in the back. About a third of the way through the first sentence of our conversation the biggest sound/concussion/boom I had ever heard/felt rocked our building. The building shook, I jumped, light bulbs exploded, thin dust and smoke appeared and it stank. All at once. 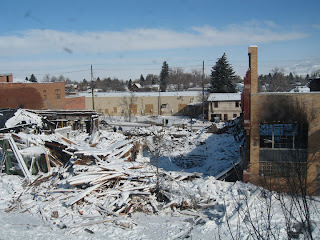 Thinking we had just had the mother of all earthquakes, I jumped into a doorway. When the building didn't fall down....I looked at my stunned co-worker and said: WHAT THE F*%$ WAS THAT???"..."WE NEED TO GO. RIGHT NOW."

We ran downstairs and discovered lots of other stunned folks in the parking lot behind our building; most of us thinking something fell on the building from the adjacent construction site. One of the contractors on the site, said "it wasn't us, something happened across the street."

Something, indeed. Following the crowd, we ran around the corner of our block to discover that three buildings across main street had been reduced to piles of wood and bricks. It was eerily quiet and just a little dusty. No smoke, no fire. Just a pile and a bunch of stunned people standing around in a snowy, quiet and surreal Main Street. Suspecting that this was going to get worse before it got better, I suggested to my co-worker that we retrieve our belongings from our undamaged office post haste as 1) our building may not be that safe and 2) this place was likely to be closed down for a while.

We were in and out of our offices in about a minute. I resisted the urge to go to the somehow-still-intact front windows and take pictures of the mess that were three buildings a few minutes ago. Retreating to our back parking lot, smoke started to build quickly into the sky. Sirens and emergency vehicles appeared from all directions. We called other co-workers to inform them that work was pretty much off for the day, and if they wanted to know why just check out the now-huge black plume rising from downtown. Our boss saw the explosion from his sixth-story apartment about seven blocks away and said the fireball from the blast went about 500' up into the morning sky. Several of our co-workers dialed our office - knowing that a few of us were likely there only to get the endless ring as both us and our digital phone system were now definitely off-line. We called immediate relatives to inform them of the events and our safety.

After I called Jen, I wanted to leave. I went home and was amazed that the smoke plume burned prominently and clearly visible from my house for most of the morning into the early afternoon. Still somewhat dazed, I was even to shell-shocked to consider skiing at Bridger for the day, despite the powder conditions.

It was announced today that one person was killed in the blast - amazing really considering how many people can be in downtown on any given day. In addition to a life lost in the blast, Bozeman lost a piece of its historic downtown. 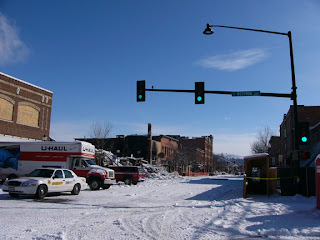 Before from Google Street View.... 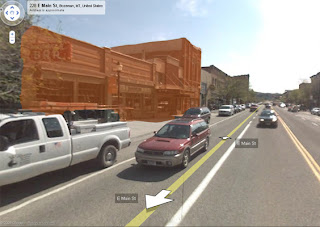 I've just relived everything again. This is crazy! O.